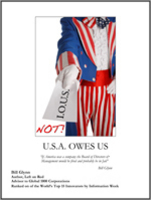 Bill Glynn, controversial author of “Left on Red,” ranked one of the top 15 innovators in the world, takes on economic and social issues looming over America and the world economy and offers simple to understand explanations and solutions for our woes. He has appeared with Fox Business network anchor Neil Cavuto, is a regular guest on over 80 radio stations and broadcast networks nationwide and has joined leaders including Hugh Hewitt, Rita Cosby, Ross Perot and many others in presenting his solutions on the failing economy.

A movie and short book – I.O.U.S.A.- recently examined the spiraling national debt and economic decay presenting the facts and interviews from America’s most successful and brightest executives including Alan Greenspan. The U.S., burdened now with $ 10 trillion in debt, is on the verge of bankruptcy and I.O.U.S.A. painted a grave picture of these facts. Bill Glynn believes we are owed answers and solutions to protect our way of life. In fact, he is often quoted saying:

“If America were a company, and we should be viewed as such as a Capitalist Nation, our Board of Directors and Management would be fired and in Jail.”

As a shareholder of this nation demanding solutions to America’s problems, Bill Glynn has written I.O.U.S.A. NOT! – USA Owes US. The document is 40 pages and free to download at http://www.billglynn.net . He addresses eleven sore subjects (only a few of many) that America must overcome in order to keep our society and way of life going. In the first chapter, The Silver Bullet, he outlines a variety of ways we can move forward to solve some the present economic woes and the many issues facing our country.

According to Bill Glynn, if we allow the government to do more of the same, we will lose international confidence and will be cut off from those nations buying our debt that are keeping the USA from bankruptcy right now. As bleak as all this sounds, Glynn says his solutions are simple and attack the very cancer that is crippling our nation economically and socially. According to Glynn, his pioneering 10% solution to eradicate the U.S. deficit is among the most noted across the country. Glynn continues by saying, if you plan to vote for McCain and Palin or Obama and Biden this hand guide will wake you up and provide education and insight on issues everyone should understand going into one of the most important elections in our lifetime.

Bill Glynn is a successful entrepreneur, author of Left on Red (Wiley & Sons) and voted one of the world’s top 15 innovators by Information week. He advises leaders of over 20 global 1000 companies, is an influential insider in music and film entertainment and manages, advises various venture funds and businesses he has founded, incubated or facilitated. He is credited with helping Chat and Instant Messaging become pervasive across the Web, the creation of landscaping appraising and insurance underwriting for landscaping, foundation work in securitizing private equity through the collateralized private equity obligation among many more. He has raised over $ 1 billion for the funds and private ventures he has helped create and advised. He serves the leadership of London’s Royal Institution’s World Science Assembly and the East West Institute where he focuses on the weaponization of science and harmonizing humanity among the major faiths on earth.

Lifeloc Technologies, Inc., a Colorado based manufacturer of breath alcohol testers, announces the immediate availability of the FC20BT (Bluetooth

The news articles about the foreclosure crisis going on in our country are rampant but what most of them do not relay is that the situation in Florida is many ways worse than in any other state. According to the latest statistics released by the Mortgage Bankers Association, Florida accounts for 23.7% of all foreclosures nationwide; which correlates to 466,454 homes. Not only is this the largest number of any other state, it is larger than the total number of loans in 22 other states combined. According to statistics from the Office of State Courts Administrator, as of June 30th, Florida’s courts are backed up with a caseload of 260,815 cases plus an additional 117,000 fresh cases have been filed since then. Couple that with the termination of special court funding for foreclosure cases which took effect on July 1st and it appears the crisis in Florida is only getting worse.

So how did this backlog swell to such an enormous figure? Why does it take so long for a bank to foreclose? This was not always the case, right? Before Wall Street started selling shares of stocks in pools of mortgages through a process known as securitization, foreclosures could be handled within a few months. Now, according Evan M. Rosen of Rosen & Rosen, due to the banks rush to profit and lack of proper simple documentation required in any real estate or mortgage transfer, as well as the lack of complicated documentation required as a result of the securitization process, no one knows how long some cases will take because in many instances no one can properly prove who is entitled to foreclose.

Like every other plaintiff in any civil lawsuit, the plaintiff has the burden to prove all elements of their case by a preponderance or greater weight of the evidence. In a foreclosure action, the entity entitled to foreclose must successfully prove by this standard, among other things, that they are the proper party; the entity or person actually entitled to receive payments due under the terms of the note; and/or the party entitled to foreclose. This is generally referred to as legal standing and often, the banks cannot prove they have it.

Below is a chart illustrating the time periods in the pre-foreclosure and foreclosure process in Florida as prepared by Rosen & Rosen, P.A.

Day 1 Payment due, no payment made

Day 90+ – Any time after 90 days the entity claiming their entitlement to foreclose can file suit. In many instances, this process alone can take more than 12 months, having competent counsel to point out various deficiencies typically has the effect of lengthening this process even more.

Day 1 – Complaint and Lis Pendens are filed and served with a summons on the property owner.

Day 20 A responsive pleading is due. If not filed, plaintiff moves for default judgment. With competent legal counsel, there can be a multitude of legitimate issues raised via motions, hearings, and discovery requests which would extend this time period greatly.

Day 45 60(if unrepresented by competent counsel) – Court schedules hearing for default judgment and at the hearing enters final judgment of foreclosure. By statute, the court should order the sale of the property on a specified day within 20-35 days of the order. However, sales can still lawfully take place later than 35 days and are sometimes taking many months after the order is entered.

Day 80 95(if unrepresented by competent counsel, under a more typical timeline) Notice of sale published once a week for two consecutive weeks in local publication, with last posting at least 5 days prior to sale; auction sale conducted; winning bidder applies 5% deposit from funds advanced electronically prior to sale and then pays the rest by noon the following day. Dade, Broward and Palm-Beach Counties conduct their auctions online. Certificate of sale is filed promptly after sale and right of redemption ends when certificate of sale is filed.

Day 105(if unrepresented by competent counsel, under a more typical timeline) Ten days after filing certificate of sale, certificate of title is issued title vests, no further action necessary unless property is still occupied.

Day 106 -119(if unrepresented by competent counsel, under a more typical timeline) 1 -14 days after certificate of title issues, if property still occupied, sheriff posts a notice to vacate/writ of possession.

Day 119 140(if unrepresented by competent counsel, under a more typical timeline) 1 21 days after notice to vacate, sheriff vacates the property.

If, on the other hand, the entity seeking to foreclose is not the same entity as the original mortgagee or lender, and the owner has retained competent counsel, this process can take years, if the bank is ever able to foreclose

The above is just an overview to help understand the current state of the foreclosure process. For more details or if you have any questions or comments, you are welcome to call or e-mail the author of this article for more information.

B2B credit history danger publicity is now at the best of C-degree precedence worries. In accordance to Tinubu estimates, customer receivables depict more than a 3rd of a B2B companys property. A lot more than twenty five% of business failures in Europe are the direct consequence of B2B client defaults. Write offs of poor consumer financial debt have grown from an typical .five% of revenues to one% or higher, dependent on business and place. Fantastic trade credit history in Europe is five instances the complete quantity of limited-term lender credit score.

“We have worked with best servicing and securitization firms to make PowerCore Thanks Diligence a sturdy mortgage pool validation and analysis software” stated Justin Kirsch, President of Accessibility Organization Systems, “This specialist method will accelerate the owing diligence approach significantly thanks to it truly is inherent workflow and company rules. Also, our integration to 3rd-social gathering compliance, fraud and valuation programs will make PowerCore Due Diligence a central decisioning resource dependent on each side of the financial loan.”

The PowerCore Owing Diligence application is provided as an ASP merchandise and is available quickly. Accredited computer software instances are also obtainable.

“The mortgage banking and securities business is experiencing incredible issues” mentioned Kirsch. “Our release of PowerCore Thanks Diligence in addition to our sturdy line of hosted and managed merchandise will situation our buyers to climate the recent circumstances whilst readying them selves for the eventual marketplace enhancement.”

Obtain Company Systems is the foremost service provider of internet hosting and managed solutions, integration, reporting and skilled solutions for the mortgage and finance industry. Via our merchandise and services, ABT gives a total range of on-demand from customers, robust answers made to simplify, streamline and improve our customer’s organization. ABT’s managed and hosted solutions are all produced accessible genuine-time by way of the Internet employing stringent SAS70 kind II-audited protection systems.

ABT’s philosophy is to give a vendor-neutral technique to help our clients leverage present and new computer software answers that are ideal in class for their unique surroundings. ABT provides SAS70 Type II web hosting environments for these answers to make certain company-degree stability, redundancy, high availability, catastrophe recovery and company resumption capabilities. For much more data, please pay a visit to mortgage thanks diligence or contact (800) 530-8054.

Copyright 2008 Entry Organization Systems. All legal rights reserved. Obtain Business Technologies, ABT and the ABT emblem are emblems of Obtain Enterprise Systems. Other company and / or item names may possibly be registered emblems or trademarks of their respective organizations.