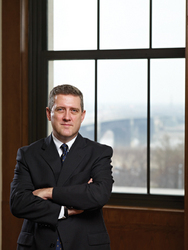 In remarks today to the 19th Annual Hyman P. Minsky Conference, St. Louis Fed President James Bullard assessed the state of the regulatory reform debate. In his presentation, Containing Risk in the New Global Financial Landscape, Bullard said, As the nations lender of last resort, the Fed will be at the center of managing any future financial crisis and this argues for the Fed playing the lead role in the new regulatory structure. A future Fed with an appropriately broad regulatory authority provides the U.S. with the best chance of avoiding a future crisis.

He also described how current regulatory reform proposals are not adequately addressing several key issues that could contribute to future financial crises. Only a few of the current financial reform proposals are likely to help prevent future crises, most are not, said Bullard. These issues include the susceptibility of non-bank financial firms to run-like phenomena; the existence of large financial firms worldwide that are too big to fail; the question of how any form of regulation could prevent an entire industry from adopting the same strategies, and addressing government-sponsored enterprises (GSEs).

Bullard emphasized the critical need to consider the entire financial landscape rather than just the banking sector. The crisis encompassed a far larger segment than just commercial banking, Bullard said. Many non-bank financial firms, outside the banking sector, were at the heart of the crisis. These firms were not regulated by the Fed.

He added, As the crisis started in the fall of 2007, 20 firms accounted for about 80 percent of financial sector assets in the U.S. He noted that about one-third of this total was comprised of bank holding companies, with two-thirds comprised of non-bank financial entities such as the GSEs (Fannie Mae and Freddie Mac), investment banks, insurance companies, and thrifts.

The non-bank financials are a whos-who of the most nettlesome entities during the crisis, he added. All of these firms faced severe stress during the crisis, regardless of the type of firm or the nature of regulation, he said. This is generally true globally as well. All were taken in by the allure of securitized products in various ways.

Bullard questioned whether current regulatory reform proposals would help prevent a similar scenario from happening again. How can we prevent an entire industry from adopting the same strategy? he asked. I do not see this being addressed in current proposals.

The View from the Fed

The remaining 85 percent of banks and assets had non-Fed primary regulators, he noted. Then, as the crisis unfolded, all eyes turned to the Fed as the lender of last resort. Due to its narrow regulatory authority, the Feds view of the financial landscape was limited coming into the crisis. This made it harder to perform its lender-of-last-resort role, Bullard said, And, this led to a lot of ad hoc decision-making.

Bullard called for a strengthened central bank and cautioned against some current regulatory reform proposals that seek to create a Wall Street-only Fed. The Fed should remain involved with community bank regulation so that it has a view of the entire financial landscape, he said. It is important that the Fed does not become biased toward the very large, mostly New York-based institutions.

Bullard explained that one critical role of regulation is to provide a level, competitive playing field for institutions of all sizes. Community banks tend to fund smaller businesses, an important source of job growth for the economy. Understanding this process helps the Fed make sound monetary policy decisions.

He added, Regulation works well for the thousands of community banks in the U.S. The system features deposit insurance plus prudential regulation. The system allows failurecapitalism at workbut prevents bank runs and the associated panic. Community banks did not cause the crisis and do not need to be re-regulated.

The central bank must be well-informed about the entire financial landscape in order to head off a future crisis. The reform response should be to provide the Fed with an appropriately broad regulatory authority, Bullard concluded.

Editors Note: The presentation can also be found at:

Ph.D. students in business and economics from leading U.S. universities will gather at the University of Chicago Booth School of Business (http://www.ChicagoBooth.edu) September 9-12, 2010, for a conference intended to encourage more academic research on the causes and prevention of financial crises.

“There are many unanswered questions surrounding the recent financial crisis,” said Stacey Kole, deputy dean of Chicago Booth and organizer of the conference. “Our faculty is motivated to find the answers and to spark research from emerging researchers in finance,” said Kole, who also is a clinical professor of economics.

Hugo Banziger, chief risk officer and a member of the management board of Deutsche Bank, will speak at the conference in addition to seven Booth professors who specialize in banking and finance. Professor Raghuram Rajan will lead a session on illiquidity and interest rates, while Professor Douglas Diamond will discuss short-term debt and financial regulation.

Other Booth speakers at the event are Professor John Cochrane, who will present a skeptical appraisal of frictions in the financial crisis, Professor Anil Kashyap, who will discuss macroprudential regulation and Professor Christian Leuz, who will lead a session on economic consequences of securities regulation and enforcement. Professor Tobias Moskowitz will moderate a discussion of open research topics and Assistant Professor Amit Seru will present on securitization and the subprime crisis.

“The symposium is part of a multi-year academic partnership between Deutsche Bank and Chicago Booth,” said Malcolm D. Knight, Vice Chairman at Deutsche Bank. “The partnership is designed to support and expand education related to risk management and financial regulation.”

Conference sessions will take place at Chicago Booth’s Gleacher Center in downtown Chicago and at Harper Center on the school’s main campus. Deutsche Bank also sponsors a speaker series at Booth on risk and regulation in financial markets.

Deutsche Bank is a leading global investment bank with a strong and profitable private clients franchise. A leader in Germany and Europe, the bank is continuously growing in North America, Asia and key emerging markets. With 81,929 employees in 72 countries, Deutsche Bank competes to be the leading global provider of financial solutions for demanding clients creating exceptional value for its shareholders and people.

About the University of Chicago Booth School of Business

Veros Real Estate Solutions (Veros), an industry leader in enterprise risk management and collateral valuation services, has announced the release of a white paper entitled AVM Valuation and Forecasting Technologies: Capital Markets. It is free and available for download at http://www.veros.com/AVMValuationForecastingTechnologies.pdf.

The white paper provides insight into how the functionality of automated valuation modeling (AVM) technology helps to generate important information required to improve portfolio and risk management analytics, as well as optimize capital investment allocations. Also highlighted is the use of AVM technology in residential real estate platforms.

Three years after one of the biggest U.S. residential housing market crashes in history, investors still feel skittish about investments in the RMBS market due to discomfort in the ability to properly analyze risk, said William J. OBrien, capital markets sales director for Veros. While the housing market remains flat, there are opportunities available that can be capitalized on by making calculated risks using AVMs. Our goal is to breathe some life back into the housing markets by helping investors make smart decisions.

Included is a synopsis of what the data availability and analysis was pre-crisis and how this standard contributed to the housing market crash. A review of directives that addresses analytics and risk management post-crisis is also included. The paper concludes with an explanation of how AVM modeling provides the transparency and accuracy that investors need to be confident in making decisions.

This is the first of three white papers focusing on AVM technology and its various applications to the secondary investment market, as well as the residential housing market.

To download a free copy of the white paper, please visit: http://www.veros.com/AVMValuationForecastingTechnologies.pdf.

Gallagher will support the companies threat management solutions created to support the mortgage industry handle todays tough economic regulatory setting. The division is targeted on mitigating the threat of enforcement actions and making certain operational readiness and compliance with the rigorous requirements of Authorities lending.

“The benefit of currently being an FHA originator continues to be of utmost importance to numerous lenders and specifically in the present day. Conversely, the compliance pitfalls and penalties associated with originating and servicing government insured mortgages are too at all time highs as is the degree of regulatory scrutiny,” said Chairman Brian Montgomery.

As a seasoned mortgage loan banking expert, Gallagher is uniquely experienced to direct this division.

Brideen has been an integral member of our crew considering that she joined us a tiny in excess of a 12 months in the past, explained Partner Tim Rood, We appear ahead to continuing to make use of her expertise to expand the answers and providers we supply to the industry.

Gallagher remarked, “I am extremely happy to be component of Collingwood’s Chance Management and Compliance group. With the at any time-increasing concentrate on lenders by regulators, Collingwood is foremost the cost for proactive administration of compliance in all locations of a lender’s operation.”

Considering that February 2011, when she joined The Collingwood Group, Gallagher has contributed her priceless industry encounter in origination, functions, funds marketplaces and third get together correspondent organization to assistance the enlargement of the corporations companies. Gallagher will continue to leverage these capabilities in her new place.

Prior to becoming a member of the Collingwood Group, Gallagher held senior degree account management positions with several top tier Correspondent lenders and was also a senior staff member at a hedge fund concentrated on the acquisition and disposition of distressed belongings. Gallagher retains a Bachelors Degree as properly as a Masters in Company Administration from Villanova College, and a Juris Medical professional from Temple College. She is a member of the Pennsylvania Bar, the Mortgage loan Bankers Association of The united states and a graduate of the Associations Potential Leaders Plan.

The Collingwood Group (http://www.collingwoodllc.com) is a Washington, DC-primarily based enterprise advisory firm focused on increasing customers organizations, selling income growth and increasing expenditure returns. The organization is led by Brian Montgomery, previous Assistant Secretary for Housing and Federal Housing Commissioner. Montgomery played a major function in the federal governments attempts to deal with the nations economic disaster and restore steadiness and liquidity to fiscal marketplaces. The companies other founders have held management positions inside of other businesses in the monetary providers market, like the GSEs. Collingwoods skills spans all facets of Company, non-Company and FHA/VA housing funding programs Ginnie Mae securitization routines domestic and international secondary industry activities and issues principal and specific servicing total asset lifecycle vendor and talent administration and all factors of portfolio thanks diligence, acquisition, property administration and asset disposition.